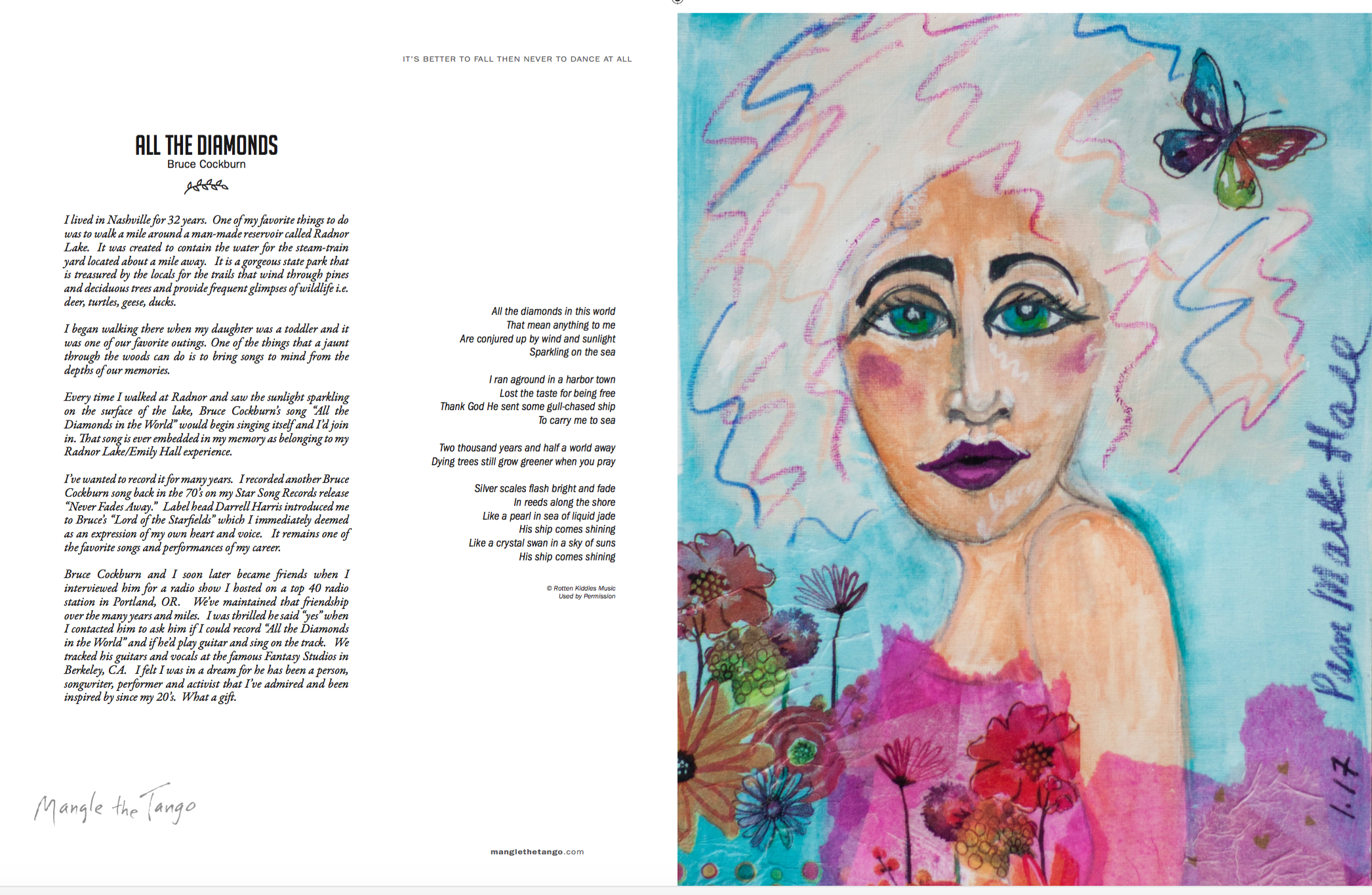 I'm in the process of raising funds to record my first studio album in over two decades.  I've got all the songs, the producer, engineer, studio, players and special guests all lined up.  There's only one thing I don't have.  You guessed it.  Money.   I've had enough interactions on social media to get the feeling that my old fans would like to hear
this new music.  Will you please help me make "Mangle the Tango" (album title) a reality?

Merry Christmas to everyone near and far.   I am grateful for each of you and wish you a wonderful holiday with friends and family.

What a thrill to perform with Noel Paul Stookey recently on a California summer evening to raise awareness and funds for a local food bank.
He is a lifelong role model and friend.  We co-wrote and recorded "Lullaby Prayer" that was included on the "Good Night, Sleep Tight"
album I produced that included songs from other artists like Debbie Boone, Brown Bannister, John Fischer, Randy Stonehill,
Jamie and Dan Collins, Kelly Willard, Patti Roberts and Jackie Cusic. 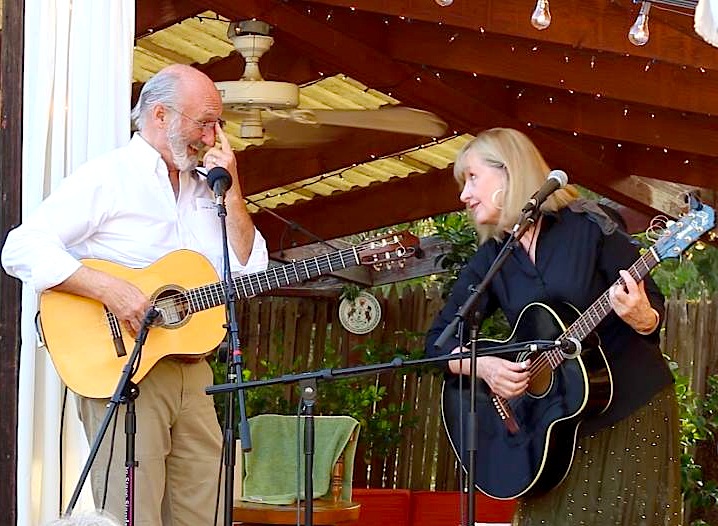 Click here to purchase a t-shirt with the logo below on front.  Comes in White or Military Green 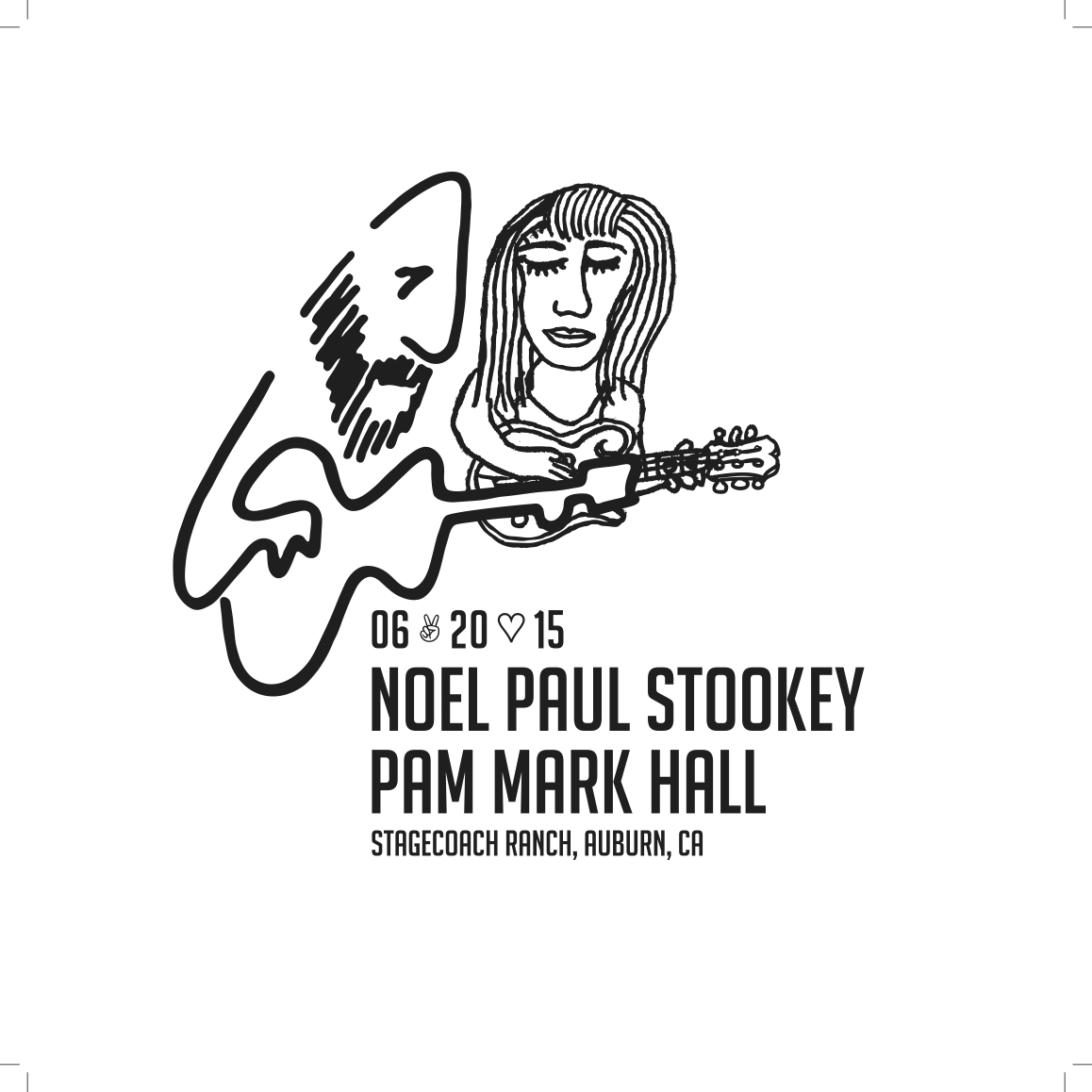 After burgers at the Black Bear restaurant around the corner from U.C. Davis, my friend,  Steve Streeter, enthusiastically urged "Oh, I've got to show you the #CompassionBench! Let's go, it's just a couple of blocks away."   As we walked,  he told me the story of how a man named David Breaux stands at the corner of C Street and 3rd Street (on the edge of AT&T's property) with a notebook asking people to share their written concept of the word "compassion."   David raised so much awareness of compassion that the community came together and built the "Compassion Bench" out of recycled materials - plastic bottles, plastic bags, covered with with plaster and embedded
centerpieces of mosaics that include symbols and words extracted from the interviews.

Delighted, I investigated the bench with my eyes and hands - feeling the different textures and sensing the inspiration one person evoked in a community to make a difference.  AT&T donated the corner property to the project, and a diverse group of people came together to create the #CompassionBench

Serendipitously,  at that moment, David Breaux, the project's visionary, crossed the street to meet us. He shared his plans to take the Compassion project to other cities around the country.   David has compiled the concepts on compassion in a book.   He graciously signed a copy for me: To Pam

Live as Love through the compassion within your heart.

Learn more about David H. Breaux and his Compassion project at www.compassionguy.ning.com 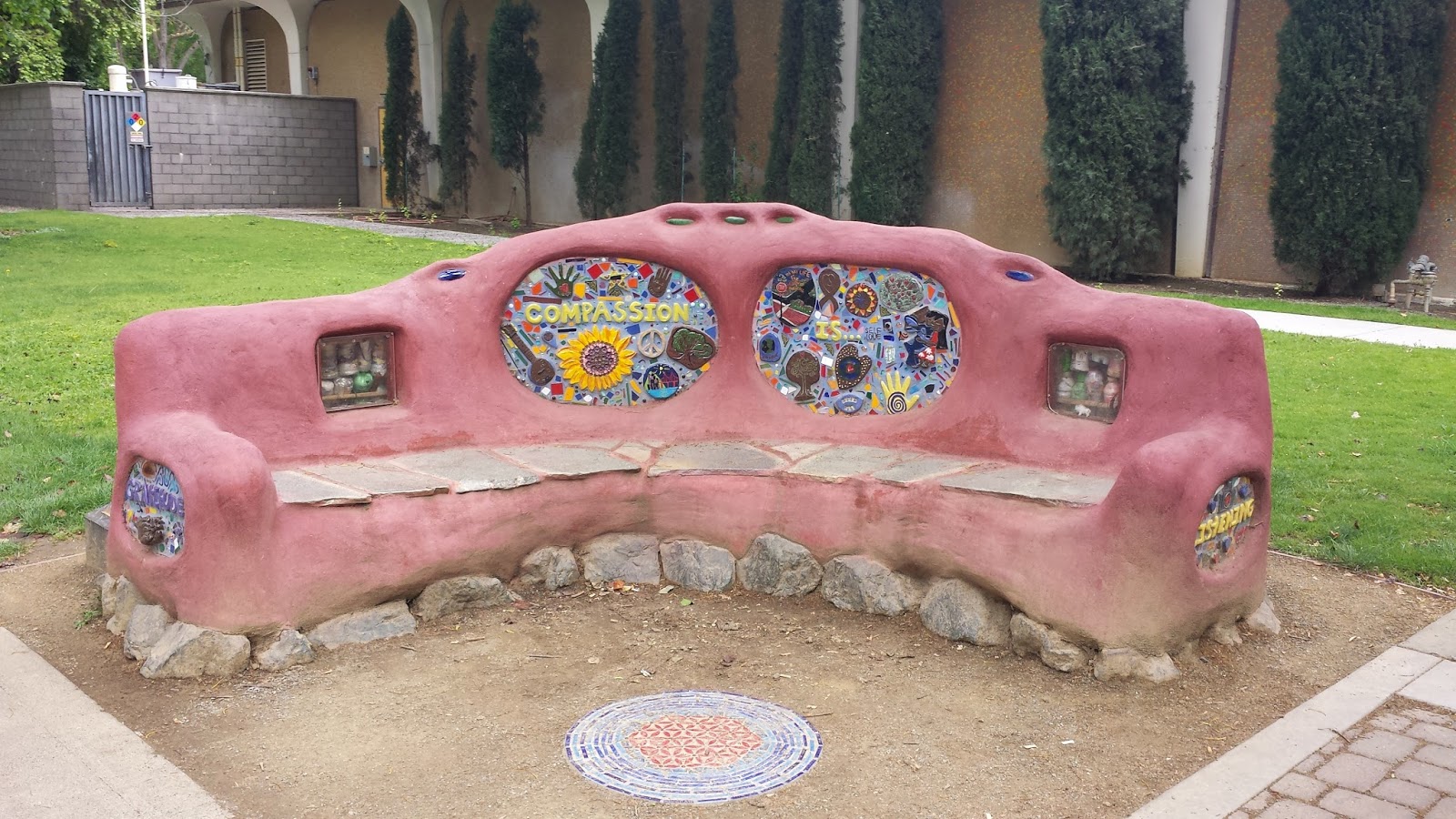 The Compassion Bench in Davis, California 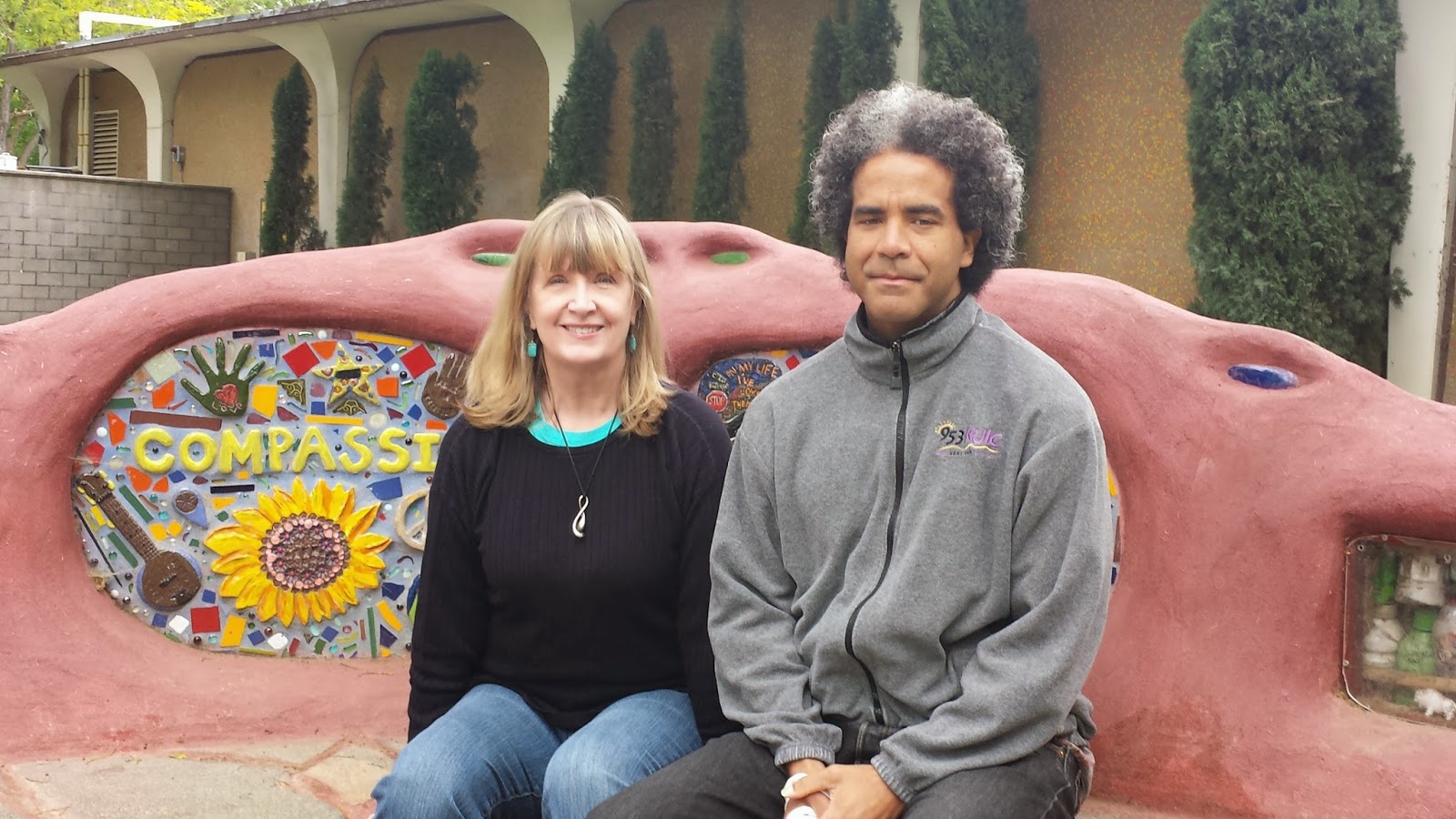 Zero visibility.   Snow Storm - Looking out the window of my flight heading back to Nashville - only seeing white.  I've spent 2.5 months,  in 7 cities, 4 states meeting hundreds of people during "open enrollment" helping them sign up for benefits offered through their employers.  I heard amazing stories from incredibly hard-working, low-paid people.  Stories of losing children and husbands to bullets from the guns of friends and gangs.   Stories of losing mothers, fathers, aunts, friends to cancer.   Stories of working two minimum wage jobs to barely meet the bills.  Stories from single moms making $9 an hour with daycare bills of $800 a month, and medical deductibles of $3000.

With all the Shouting about not increasing the minimum wage, and how "those people" feel they are entitled, I wish the shouters could be in my shoes and have met these incredible people.   The last location I worked at was a nursing home for the mentally ill and alzheimer's/dementia patients.   I met with the nurses, nurses' aids, cooks, therapists, security, maintenance and all helpers.  In order to meet with all the employees, I had to cover three shifts.  To say I am sleep deprived is an understatement.  I could not have done it without the help of three amazing people who worked there - Thanks to Keith, Rita and Kenneth.   And now, time to zzzzzzzzzz.

This morning within a two minute period of time,  I spilled espresso on my bed; my computer charger died; and I received an email from Kyle Lehning,  husband of a woman I greatly admired, delivering the news that she recently died of uterine cancer.  Chris Caravacci.  She was an amazing, beautiful human being.  Warm and kind while equally a focused, strong business manager.

There is no one and nothing to  convince me that anyone who suffers from cancer, Auschwitz or anything else is because it’s  “God’s will.”    No, no, no!
Do I believe God is good and can cause all things to work together for good for those who love Him, and Even for those who don’t?  Yes, yes, yes!

Life is beautiful and there’s always something to be grateful for.   But sometimes life hurts, love hurts, disease hurts and quoting a Bob Dylan song title -  “Everything is Broken.”  That is why the little kindnesses we show each other along the way are like air, food and water for the spirit and soul.  I believe that is God’s will.

P.S.
I met Chris Caravacci and Kyle Lehning, then President of Asylum Records,  when I was hired by the VP of Promotions, to produce a listening event during CMA for radio programmers to hear Asylum's incredibly gifted new artist, Mandy Barnett.  Mandy became the voice/persona of Patsy Cline and continues to perform the Patsy Cline show in Nashville at the Ryman auditorium.  Chris Caravacci became the business manager for Scott Simon, who signed the Dixie Chicks, and managed Tim McGraw.  Kyle continues to produce artists like Randy Travis, Dan Seals and other greats as well as play incredible B-Hammond organ in a jazz quartet called Leonard Small regularly at Nashville's classy jazz bar and restaurant - F. Scotts.

I ferment in the fertilized creative hot bed of who I've become.  I tell myself  " There's a lot more to be done in a short amount of time so get moving!" and then I turn to my CREATOR and ask
"OK, WHAT? What do ya want? I want what You Want so Please (and I believe it is a collaboration)  SO PLEASE, GOD, help me figure this out - I don't want to get it wrong." And I think I'm hearing back...."Girlfriend, relax, keep on doing what you do..... we'll figure this next challenge out - don't worry, I already took care of that wrong part." Whew! - Thanks! gOd GoD goD

Please add your own More and Less.